Hi everyone! We apologize that it has been awhile since we posted news to our community. With the warmer weather coming, there’s been a flurry of activity to have the enclosures ready – larger and with new structural enrichment. Mickey has her new, old home outside now. We picked up Mickey's cage (it is really like a marmoset condo) from Kimberly. Leonard built it back up outside, so she has indoor and outdoor access. Mickey loves to feel the wind in her hair - you can see it is sensory overload.

The past months have been filled with happiness and sadness, as precious Yoshi physically left us - but we know that he is with us in spirit. We will dedicate an upcoming blog to his memory, so that you can all know his story and what he has meant to the people whose lives he was a part of...

Nan and Chelsea continue to blossom. It is such a thrill for me to see them every weekend and learn their likes and dislikes...for instance, the other day I was cleaning with Sherri, and touched one of Chelsea's many rubber boots. I picked this particular one up and said with a scrunched up nose - "this one looks a bit yucky"...well, Miss Chelsea gave me the baboon raised eyebrow look - which gave me paused and I wondered what had I done...do-uh..I had caused offensive by commenting on the state of her boot! Chelsea and Nan also have a new outdoor area, with ramps that make it easy for sight-impaired Nan to navigate. As Sherri says, Nan sits quietly and takes it all in…

With the nice weather, we have been taking fresh, young shoots off of the big trees, and putting them in the enclosures. The lemurs love to munch on the leaves – they get so excited. We also dig up clumps of grasses and daisies, which Pea and Pierre love.

Julian has come a long, long way. When he first arrived, he was so traumatized, and it manifested itself in frequent self-mutilating behaviours, such as biting and tearing out his hair. We could not even look at him without causing him anxiety - he was our little ghost - as he did not want to be seen. It was a difficult winter, and at times we really wondered if we were doing the right thing and if he could recover from his human-inflicted emotional scars.

Now, as I drive up on Saturdays, and see Julian, or Jules as we call him...he is outside, sitting on the perch, in the sun, with Maggie, one of the dogs, sitting near him (outside the enclosure). He is talking with Lexy and watching Pierre, his baboon neighbour. Just hanging out, watching the world go by - you would not think it is the same macaque. Julian has learnt that he is safe, and that no one will hurt him. He knows we are here for him and together we will heal. A key turning point was a few weeks ago. Shelley and Paxton had made enrichment items for everyone – including fresh cut branches of trees hanging from the mesh overhead along with plastic bottles, filled with lots of green grass and yummy treats. Pierre just ripped his bottle down and started sussing out what was inside. Julian could not seem to get a hold of his, and got frustrated. His first reaction, of stress, what to bite himself, which he started to do. However, he saw the tree branch in his area, paused, and then starting biting that. After a second or two, you could see him getting himself together and tried again for the bottle, which he got. Kim and I were watching this and it was huge to see that he was able to redirect his frustration and anxiety away from himself. Well done Julian!

We are thankful to all the committed volunteers who daily make a difference in the lives of the residents. Amongst them, is the very talented Ann Walsh, one of our regular Sunday volunteers. Her photos of the folks are magical - she really captures their essence and personalities.

Summer 2009 will be a super busy one, with lots of events and outreach happening. Please mark your calendars for August 15th - for our second annual Open House...more details to follow.

Thanks for reading and caring,


Posted by Rachelle Hansen at 5:26 PM No comments: 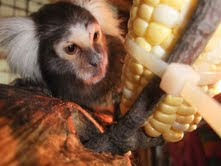 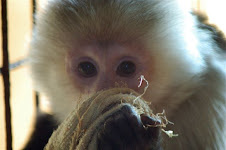 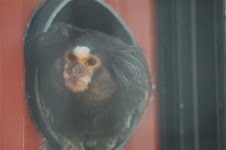 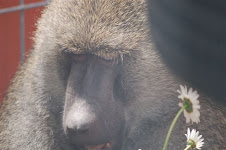 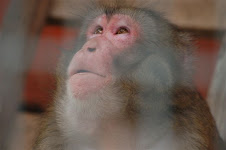 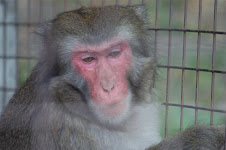 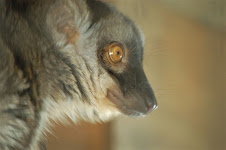 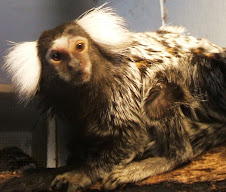 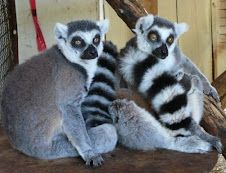